Use the NOT function, one of the logical functions, when you want to make sure one value is not equal to another.

The NOT function reverses the value of its argument.

One common use for the NOT function is to expand the usefulness of other functions that perform logical tests. For example, the IF function performs a logical test and then returns one value if the test evaluates to TRUE and another value if the test evaluates to FALSE. By using the NOT function as the logical_test argument of the IF function, you can test many different conditions instead of just one.

The NOT function syntax has the following arguments:

Here are some general examples of using NOT by itself, and in conjunction with IF, AND and OR.

Here is a fairly common scenario where we need to calculate if sales people qualify for a bonus using NOT with IF and AND. 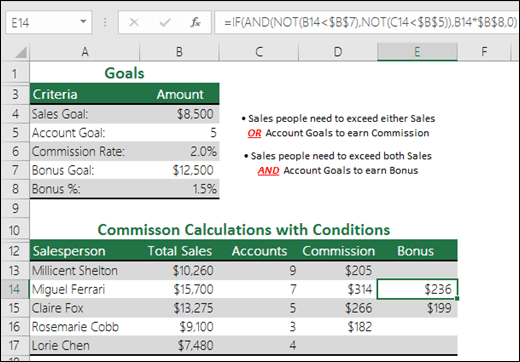