You can create relationships between lists by using a combination of unique columns, lookup columns, and relationship enforcement (cascade and restrict delete), all of which enhance your ability to create more sophisticated business solutions and help preserve the integrity of your data. 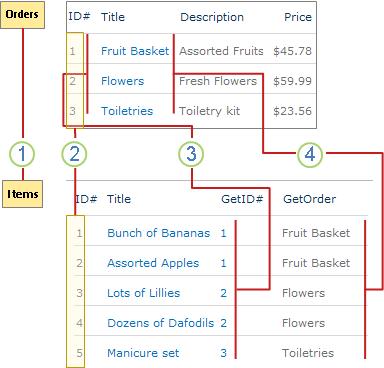 2. Each list has unique columns to ensure that the correct data is matched.

4. A secondary lookup column in the source list automatically inserts the Orders Description column from the target list.

Note:  Uniqueness is not case-sensitive, so for example, ORD-231 and ord-231 are considered duplicate values.

A unique column must also have an index. When you create a unique column, you may be prompted to create the index and it is automatically created when you click OK. Once a unique column has an index, you cannot remove the index from that column, unless you first redefine the column to allow duplicate values.

The following table summarizes what column types can and cannot be used to create unique columns.

The following table summarizes what column types can and cannot be used to create lookup columns.

A lookup column with an enforced relationship

In a lookup column with an enforced relationship (also called referential integrity), you can lookup single values and maintain the integrity of your data in the target list in one of two ways:

Cascade Delete    When an item in the target list is deleted, the related item or items in the source list are also deleted. In this case, you want to make sure that all related items are deleted as part of one database transaction. For example, if you delete an order in a target list, you can ensure that the corresponding order items in the source list is also deleted. You don't want to have order items without a corresponding order, because that would create "orphan" order items that might cause confusion later on. 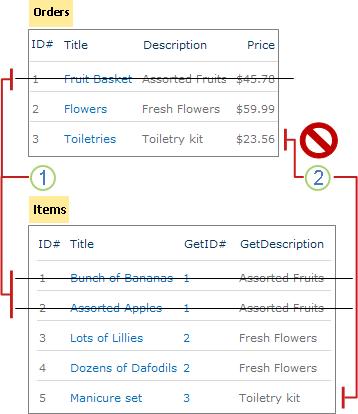 1. A cascade delete operation ensures all related items are deleted in one database transaction.

In short, enforcing a list relationship behavior helps keep your data valid and helps prevent inconsistencies that might cause problems down the road.

Note:  You must have Manage Lists permission on a list to create or modify an enforced relationship.

A lookup column with an unenforced relationship

One of the beneficial effects of creating list relationships is that you can display and edit columns from two or more lists, on one page. When you create a lookup column in a source list, the primary column displays values from the target list column, but you can also specify that additional, secondary columns from the target list also display alongside the primary column and the other source list columns. 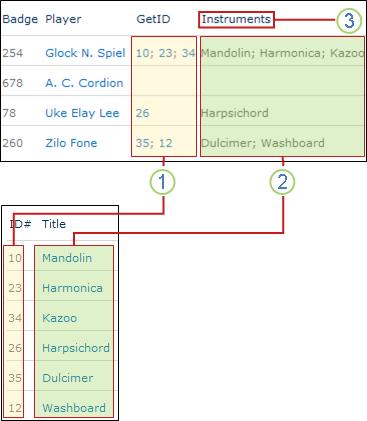 3. The column name has been changed from the default name of GetID: Title to Instruments.

When you create list relationships by using lookup columns, unique columns, and lists with enforced relationships, you can reach a resource threshold or limit and may be blocked under the following circumstances:

How to: Create or modify a unique column

How to: Create a lookup column

How to: Create relationships in the display and edit forms

Once you create a lookup column, you can modify the display and edit forms of the target list so that related data from the source list is displayed. For example, you can edit the display or edit page for the Orders list to add the related Items list and automatically connect the two corresponding List View Web Parts together by the passing the Lookup column value.

The two lists are automatically connected. After you save the page, when you display or edit an item from the Orders list, the related items in the Items list also display.