We all have limits, and an Access database is no exception. For example, an Access database has a size limit of 2 GB and can't support more than 255 concurrent users. So when it's time for your Access database to go to the next level, you can migrate to SQL Server. SQL Server (whether on-premises or in the Azure cloud) supports larger amounts of data, more concurrent users, and has greater capacity than the JET/ACE database engine. This guide gives you a smooth start to your SQL Server journey, helps preserve Access front-end solutions you created, and hopefully motivates you to use Access for future database solutions. The Upsizing Wizard was removed from Access in Access 2013, so now you can use the Microsoft SQL Server Migration Assistant (SSMA). To successfully migrate, follow these stages.

The following sections provide background and other information to help you get started.

As a result, you can still maintain the front-end Access database with linked tables to the SQL Server tables. Effectively, you can derive the benefits of rapid application development that an Access database provides, along with the scalability of SQL Server.

Still need some convincing to migrate to SQL Server? Here are some additional benefits to think about:

If you are migrating to Azure SQL Server, there are three options to choose from, each with different benefits:

For more information, see Choosing your database migration path to Azure and Choose the right SQL Server option in Azure.

There are a few issues you can address up front that can help streamline the migration process before you run SSMA:

Before you run SSMA, take the following first steps.

Tip    Consider installing Microsoft SQL Server Express edition on your desktop which supports up to 10 GB and is a free and easier way to run through and check your migration. When you connect, use LocalDB as the database instance.

Tip    If possible, use a stand-alone version of Access. If you can only use Microsoft 365, then use the Access 2010 database engine to migrate your Access database when using SSMA. For more information, see Microsoft Access Database Engine 2010 Redistributable.

Microsoft provides Microsoft SQL Server Migration Assistant (SSMA) to make migration easier. SSMA mainly migrates tables and select queries with no parameters. Forms, reports, macros, and VBA modules are not converted. The SQL Server Metadata Explorer displays your Access database objects and SQL Server objects allowing you to review the current content of both databases. These two connections are saved in your migration file should you decide to transfer additional objects in the future.

Note    The migration process can take some time depending on the size of your database objects and the amount of data that must be transferred.

SSMA converts Access objects to SQL Server objects, but it doesn't copy the objects right away. SSMA provides a list of the following objects to migrate so you can decide whether you want to move them to SQL Server database:

As a best practice, use the SSMA assessment report, which shows the conversion results, including errors, warnings, informational messages, time estimates for performing the migration, and individual error correction steps to take before you actually move the objects.

To convert, load, and migrate objects to SQL Server, Follow this guide.

Tip    Once you have successfully migrated your Access database, save the project file for later use, so you can migrate your data again for testing or final migration.

Consider installing the latest version of the SQL Server OLE DB and ODBC drivers instead of using the native SQL Server drivers that ship with Windows. Not only are the newer drivers faster, but they support new features in Azure SQL that the previous drivers don’t. You can install the drivers on each computer where the converted database is used. For more information, see Microsoft OLE DB Driver 18 for SQL Server and Microsoft ODBC Driver 17 for SQL Server.

After you migrate the Access tables, you can link to the tables in SQL Server which now hosts your data. Linking directly from Access also provides you with a simpler way to view your data rather than using the more complex SQL Server management tools.  You can query and edit linked data depending on the permissions set up by your SQL Server database administrator.

Note    If you create an ODBC DSN when you link to your SQL Server database during the linking process, either create the same DSN on all machines that use the new application or programmatically use the connection string stored in the DSN file.

For more information, see Link to or import data from an Azure SQL Server Database and Import or link to data in an SQL Server database.

The following sections describe common issues you can encounter during migration and how to deal with them.

Only Select Queries are converted; other queries are not, including Select Queries that take parameters. Some queries may not completely convert, and SSMA reports query errors during the conversion process. You can manually edit objects that do not convert by using T-SQL syntax. Syntax errors may also require manually converting Access-specific functions and data types to SQL Server ones. For more information, see Comparing Access SQL with SQL Server TSQL.

Access and SQL Server have similar data types, but be aware of the following potential issues.

Yes/No    By default, an Access Yes/No column is converted to an SQL Server bit field. To avoid record locking, Make sure the bit field is set to disallow NULL values. IN SSMA, you can select the bit column to set the Allow Nulls property to NO. In TSQL, use the CREATE TABLE or ALTER TABLE statements.

Date and Time    There are several date and time considerations:

Hyperlink    Access tables have hyperlink columns that SQL Server does not support. By default, these columns will be converted to nvarchar(max) columns in SQL Server, but you can customize the mapping to choose a smaller data type. In your Access solution, you can still use the hyperlink behavior in forms and reports if you set the Hyperlink property for the control to true.

Multivalued field    The Access multivalued field is converted to SQL Server as an ntext field that contains the delimited set of values. Because SQL Server does not support a multivalued data type that models a many-to-many relationship, additional design and conversion work might be needed.

Note    Multivalued fields are not converted and were discontinued in Access 2010.

Although VBA is not supported by SQL Server, note the following possible issues:

User Defined Functions in Queries    Microsoft Access queries support the use of functions defined in VBA modules to process data passed to them. Queries can be standalone queries, SQL statements in form/report record sources, data sources of combo boxes and list boxes on forms, reports and table fields, and default or validation rule expressions. SQL Server cannot run these user defined functions. You may need to manually redesign these functions and convert them to stored procedures on SQL Server.

By far, the most important way to optimize performance with your new, back-end SQL Server is to decide when to use local or remote queries. When you migrate your data to SQL Server, you are also moving from a file server to a client-server database model of computing. Follow these general guidelines: 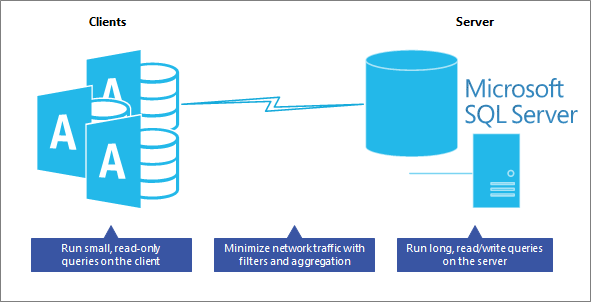 The following are additional, recommended guidelines.

Put logic on the server     Your application can also use views, user-defined functions, stored procedures, calculated fields, and triggers to centralize and share application logic, business rules and policies, complex queries, data validation, and referential integrity code on the server, rather than on the client. Ask yourself, can this query or task be performed on the server better and faster? Finally, test each query to ensure optimal performance.

Use views in forms and reports    In Access, do the following:

Minimize loading data in a form or report    Don’t display data until the user asks for it. For example, keep the recordsource property blank, make users select a filter on your form, and then populate the recordsource property with your filter. Or, use the where clause of DoCmd.OpenForm and DoCmd.OpenReport to display the exact record(s) needed by the user. Consider turning off record navigation.

Be careful with heterogeneous queries   Avoid running a query that combines a local Access table and SQL Server linked table, sometimes called a hybrid query. This type of query still requires Access to download all the SQL Server data to the local machine and then run the query, it does not run the query in SQL Server.

When to use local tables    Consider using local tables for data that rarely changes, such as the list of states or provinces in a country or region. Static tables are often used for filtering and can perform better on the Access front-end.