The RANDARRAY function returns an array of random numbers. You can specify the number of rows and columns to fill, minimum and maximum values, and whether to return whole numbers or decimal values. 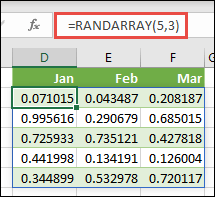 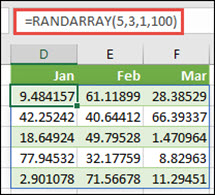 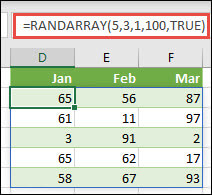 Note: January 14, 2019: The RANDARRAY function is one of several beta features, and currently only available to a portion of Office Insiders at this time. We'll continue to optimize these features over the next several months. When they're ready, we'll release them to all Office Insiders, and Office 365 subscribers.